Construction started on Sinnefjild de Ekers in the Netherlands

Chint Solar and ATLAS projects have given the official starting signal for the construction of Sinnefjild de Ekers in Joure, the Netherlands. Joshua van Middelkoop of ATLAS projects and Sofian Eljarroudi of Chint Solar symbolically rammed the first pile.

Sinnefjild de Ekers is being realized north of the De Ekers business park in Joure. The more than 25,000 solar panels, with an installed capacity of 14.3 megawatt peak (MWp), can provide around 4,600 households with renewable energy every year. Construction is expected to be completed in April 2023, after which the solar park will be connected to the electricity grid. 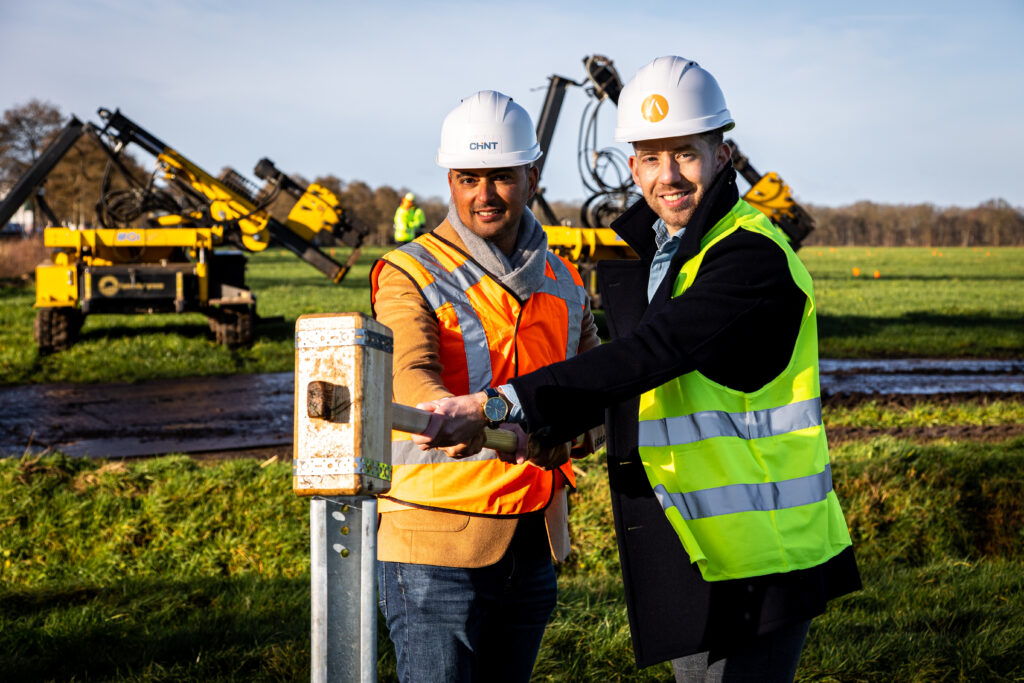 Sinnefjild De Ekers will contribute to ecological added value and strengthening of biodiversity. A green perimeter, wildlife passages, new watercourses with natural banks will be created, and trees and shrubs will be planted. The soil will be sown with an herb-rich grass mixture. In addition, a cart track will be created, which will serve as a footpath and bridleway for local walks. The cart path connects De Ekers business park with Lange Ekers and is at such a height that people can look over the solar park at eye level.

The solar park was developed by ATLAS projects in cooperation with local partners. Chint Solar will take care of the construction.

Sofian Eljarroudi, Head of Business at Chint Solar Netherlands: “We are delighted to start the construction of Sinnefjild de Ekers. It will be a beautiful solar park where we will combine the generation of renewable energy with nature, strengthening biodiversity and recreational opportunities. Sinnefjild de Ekers will make an important contribution to the energy transition and sustainability ambitions of the municipality of De Fryske Marren, and we are proud of that.”

Joshua van Middelkoop, project developer at ATLAS: “Thanks to a careful preliminary process including one on one talks, a walk-in meeting and design sessions – in cooperation with local residents, landscape architects, municipality and an ecologist – a broadly supported plan was presented against which no views were submitted or appealed. We would like to thank our neighbours, the surrounding area, the municipality of De Fryske Marren, Liander and Wetterskip Fryslân for their constructive attitude and cooperation during the development of the solar park. We will also remain involved in Sinnefjild de Ekers during the operational period.”

Start of construction of Zonnepark Vleddermond in the municipality of Stadskanaal

Looking back at an energizing InterSolar 2022

Construction started on Sinnefjild de Ekers in the Netherlands

Start of construction Solar park Dievelman in the Netherlands